District energy systems (DES) centralize the production of heating or cooling for a neighbourhood or community. District steam heating plants in North America go back over a century; now, district systems are one of the potential solutions to our energy and emissions challenges.

Most district energy systems generate heat at a central plant, or extract heat from other sources. The heat is transferred to a fluid and distributed via underground pipes to buildings where it is used for space and water heating. The fluid is then returned to the source to be reheated and recirculated. Some systems also provide space cooling in a similar way. They may deliver energy services with greater efficiencies and lower emissions than individual furnaces, boilers, electric baseboards, and water heaters fueled by oil, natural gas, propane, or electricity.

What district energy can do

District energy systems have the potential to reduce the size of heating and cooling infrastructure, reduce emissions, and even reduce costs.

For a neighbourhood, development or connected building, large-scale implementation of renewable sources via district energy systems has the potential to displace most or virtually all of the demand for conventional heating energy sources such as gas. Even district systems that use gas for peak heating needs can reduce emissions significantly.

District energy systems probably have the greatest potential in reducing the emissions from new developments, as the cost of building district infrastructure is generally lower for new construction compared to retrofitting, and buildings can be designed for compatibility. Vancouver’s Southeast False Creek sustainable community project is an example of this.

However, there is also potential for new or even existing local government buildings and facilities to connect with a district system. For example, swimming pools and arenas are energy intensive and can complement each other, and/or improve the load diversity of a district system that includes other energy uses such as residential and commercial buildings. Revelstoke’s biomass district heat system provides low pressure steam to energize the dry kilns for a sawmill (the source of the wood residue biomass) and provide hot water through an in-ground piping system to several buildings in downtown Revelstoke.

The economics of district energy are very site-specific. As a rough rule of thumb, a neighbourhood will be a good candidate if it has some of the following characteristics:

A Neighbourhood Energy Utility (NEU) is the institutional structure that underpins a district system if it crosses property boundaries. An NEU may be owned and operated by different parties, including developers, private utilities, and/or local governments. Historically, most local governments are not in the energy utility business; however, as district energy/NEU’s offer a potential revenue stream, many local governments are either looking at expanding their existing systems, or initiating new ones.

Often, an NEU evolves via business discussions with private energy utilities and developers. These discussions may also involve local governments where there is interest to pursue it. 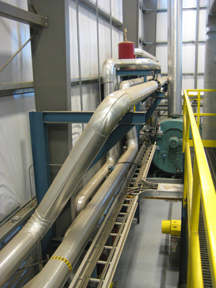